Every day has been a challenge for Les Burgess since his wife died. They had been married almost 45 years and rarely been apart.

Soon after she died aged 71 from cancer in September 2008, Les spoke openly about the care and support they received from St Elizabeth Hospice. 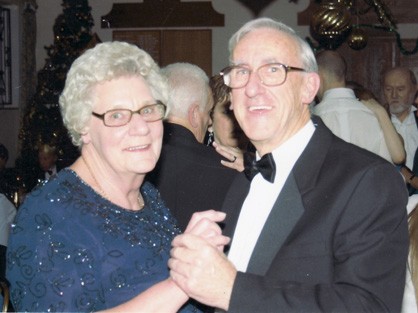 He wanted to raise awareness about the services offered, how other people could benefit and to highlight how the hospice relies on fundraising and donations to provide its wide-ranging services free of charge to people in Suffolk.

Three years on Les has again agreed to talk, this time about how he has been learning to live without Ann. But he admits it is not easy.

He has told how he has made great progress, received valuable bereavement counselling from the hospice’s Family Support team and now feels he would like to volunteer to help other people who are grieving. But he also reveals how lonely he feels and how the pain sometimes comes surging back when you least expect it.

He has continued to support fundraising where he can and recently decided to make a gift in his will to the hospice.

Les, 73, of Stowmarket, said: “After Ann died I was offered one to one bereavement counselling at the hospice. I had one meeting with a member of the Family Support team and then attended group meetings which ran for six weeks. The sessions helped me. There was no one there that I knew, we were all in the same boat and I felt I could talk openly. We would go round the table and take turns to talk about how we were dealing with it and now and again we would suggest ways to help each other.

“Everyone deals with loss and grief in different ways. My gut reaction was – ‘Why did it happen to me?’ I still question myself now and again but I know I have to learn to move on.  At times that can be very difficult. Some days I will be on an even keel then out of nowhere it will suddenly hit me again. I know people going through similar things and they tell me that is what happens. There is no rhyme or reason to it. But because of the support I have had I am learning to get up and keep going, otherwise I would spend all day sitting in the chair moping.”

Les now feels strong enough to use his experience of bereavement to help others trying to cope with loss. He has offered to volunteer at the hospice’s monthly Saturday drop- in bereavement group and the family support team feel he has made enough progress to be able to do so.

He said: “I would like to go back to the hospice and help others. There are no male volunteers doing it at the moment and I think I could offer some comfort.”

Since Ann died four days before their 45th wedding anniversary, Les has tried to get on with his life but he doesn’t pretend it is easy.  He has no children or close family around him. He tries to get out and about as much as he can, meet other people and he enjoys spending time gardening. He has also started going to the gym most mornings and that helps him begin the day.

He said: “I take every day as it comes. It took about two years for me to come to terms with Ann’s death. I took a lot of her clothes to the hospice shops but I still have a lot of her things around the house. People say to me they know what I am going through. I find that hard. I have no children and only one sister who is living in the USA. I don’t think they know what I am going through. The house is very quiet. Some days I don’t speak to anyone other than a shop assistant. I always leave some shopping for another day so it gets me out of the house. Christmas is difficult. One year I went on a coach trip and ended up sitting on my own at meal times.

“I have made progress though and the hospice support has helped. I have joined a society and I meet up regularly with people for lunch. I visit gardens and churches and at the end of last year I met a lady in similar circumstances. We go out together to the lunches and gardens and she has told me I will not have to be on my own this Christmas.

“I still meet up with some of the people I met at the Hospice bereavement group. One of the group married again, that was wonderful news. I have to get on with life but I still have bad days. I try and take each day as it comes.”

In May (2011) he returned to the hospice to view the newly-refurbished inpatient unit and met some of the staff. He said: “Ann was cared for on the inpatient unit in 2008 and the changes they have made this year are wonderful. I like the fact that the money has been well-spent. The kitchen is so much better, you can go in and have much more space and a place to sit. You couldn’t do that before. The decor was very well thought out. I was very impressed with the obvious benefits for patients and their families.”

The refurbishment cost £1.7m and most of it was funded by donations from the local community. Les said he understands how crucial fundraising and individual giving is to ensure the hospice can continue to develop its services.

Over the years he has taken part in the Hospice Lottery Superdraw, made a one-off donation and has just bought a leaf on the new Memory Tree and will dedicate it to Ann on their wedding anniversary on September 28.

Recently Les also decided to make a more substantial donation by leaving a gift in his will to St Elizabeth Hospice.

Les explained: “When Ann was being cared for on the inpatient unit I had no idea how much the hospice cost to run. The then chief executive came to chat to me one day and I asked her and I could not believe that it was several million pounds a year.

“I feel I would like to put back into the hospice what it would have cost me if I had had to pay for the care Ann had and the support I was given. By leaving a gift in my will I believe I have been able to do that with a considerable margin. Other people had donated to enable Ann to go to the Hospice. I want to do my part. I have been treated for prostate cancer and am in remission now and you never know I may need the hospice’s clinical services myself one day.

“I am fortunate that I am able to put back what I have taken out from the hospice. I know legacies can help the hospice to undertake long-term projects such as the recent refurbishment. And I hope the gift in my will may enable the hospice to develop further and ensure other people can benefit in future.”

Find out how to make a donation to St Elizabeth Hospice here.