The last weeks of Steven Govender’s life were the best he could have hoped for thanks to the care he received at St Elizabeth Hospice. 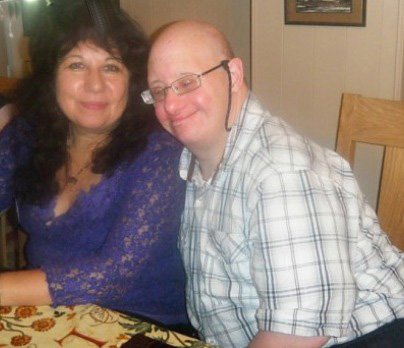 That is the belief of his sister Julie Hicks who was at his side almost all the time he was cared for on the inpatient unit.

In the three and half weeks they stayed in the large family room – adorned with all his precious belongings – there was laughter, music, a farewell concert attended by friends and family, a stream of visitors and the clinical care and support he needed.

Steven Govender was born with Down’s syndrome and did not walk until he was aged six.

He was an outgoing, cheerful man who loved music, making models, his work placements and particularly enjoyed socialising over a drink or a meal. So when he gradually stopped eating, Mrs Hicks knew there was something wrong and they went to see his GP who referred him to Ipswich Hospital for tests.

Mrs Hicks, 57, of Creeting St Mary, said: “He was lethargic and lost so much weight. I could see he was just fading away in front of our eyes because he could not drink or eat, but he never complained. He was frightened of any medical procedure and I would hold his hand and support him but I would not force him to have a test or something he did not want. He didn’t like hospitals and I stayed with him all the time. He kept saying he was fine, he accepted everything.”

It took several months for doctors to get to the bottom of it, but, after a biopsy, they were told in the summer of 2010 that Steven had an inoperable tumour in his throat which was getting bigger. He had oesophageal cancer and was given a few months to live.

Steven lived in a Mencap-run shared house in Ipswich with other people with learning difficulties and his family had to weigh up where would be the best place for him to be cared for. Mrs Hicks explained that their mum and dad had been dead many years and Steven had lived with her and her husband Derek, who run local firm Hicks Carpets, for several years before moving into adult accommodation. Mrs Hicks and the rest of the family were very close to Steven and they saw him often and ensured he had what he needed.

Mrs Hicks said: “I knew all about the hospice’s services because my dad had received respite care there 20 years ago. When it became clear Stevie was not going to recover even the hospital nurses seemed surprised that his family had decided he would not be cared for at his home or at our house.

“But we hadn’t taken the decision lightly; we all agreed it would be the best place for him. I didn’t want to let him down. He was quite heavy and I knew I could not lift him, what would happen if he needed something in the middle of the night and I could not do it for him. We also had to consider the impact on his housemates and carers, who were like an extended family, if he had stayed in the shared house. I knew the hospice could offer him a dignified place to be with all the care he needed. He could have visitors whenever he wanted, take his belongings with him and I knew they would not force him to have treatment that he was frightened of.” 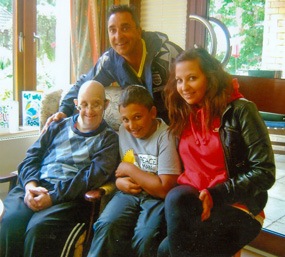 Mrs Hicks and her family went to the hospice first and got the big family room he was offered ready for him. They brought this bedding in his favourite colour, red, his models, craft materials, guitar, touch lamp, his special chair and even a box of toys for when his young relatives came to visit. It was August 2010.

Mrs Hicks said: “His face lit up when he arrived from the hospital and saw everything of his there. His bed looked onto the garden and he had everything he needed to make him feel at ease. He was like his old self. He was in control, he knew what was happening to him and he could make his own decisions about his care. We knew he would not have long left and we wanted to make sure he had the best quality of time possible. On the first night he would not settle and the nurse called me at home. I came to the hospice, they had made up the spare bed in the room and I stayed next to him every night for the three and a half weeks he was there.”

Mrs Hicks would have her meals at the hospice, though not in front of Steven as he was still not eating and drinking properly, and she praised the catering team who would remind her to sit down and eat. She said: “The catering team were wonderful, it meant I didn’t have to think about preparing food or going home to eat.”

Staff tried many ways to ensure Steven was comfortable and not frightened. Family support staff explained what was happening to him, nurses suggested pain relief on a plaster and even made him plasters looking like the Australian flag as he liked Rolf Harris which he eventually agreed to use.

The physiotherapist decorated his walking frame with red ribbons and streamers and within three days of arriving Steven had benefited from music therapy and asked if he could hold his own gig at the hospice. 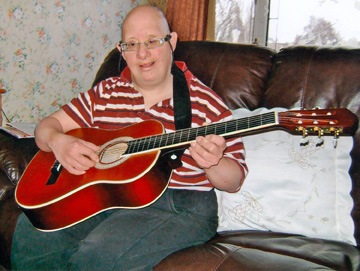 Mrs Hicks said: “Nothing was too much trouble. The music therapist organised the concert and it was held in the family and patient visitors’ lounge. It was packed. Even his doctor, the nurses and volunteers came. The catering team provided food, it was like a proper party. All Stevie’s friends and family were there, he knew what he wanted. He wore his glittery waistcoat, the one he would always wear when he did a gig, and played the drums, I had never seen him do that before, and he made sure everyone joined in. The music therapist played the piano and one of the nurses played the accordion. Nothing like that had ever happened before at the hospice and if they hadn’t organised it so quickly it would have been too late as he deteriorated soon afterwards.”

On the final night after his visitors had gone, Mrs Hicks held her brother’s hand and said to him “it’s just you and me now mate, as usual.”

Mrs Hicks said: “The nurses let me stay in the room with him afterwards until it was light. I wanted to be with him on my own, like we had been just the two of us together. I was not put under any pressure to leave him. Later the nurse helped me get him ready, we talked as we did it, and I picked the clothes for him to wear and finished it off with his glittery waistcoat.”

The music therapist played the organ at the funeral, Steven had wanted lots of music for his send off. He was a huge Ipswich Town fan and his football scarf was one of things in his coffin.
Mrs Hicks said: “Stevie was exceedingly loving and made friends easily, but he had a stubborn side to him. He loved music. Even though he could not read and write that well he could recognise a stack of records just by looking at them, he had his own way of working things out by colours and association.

“He had a girlfriend and would have loved to have got married and have children. When he went to a family wedding he would always have his photo taken with the bride and say, ‘it will be me next.’  It broke my heart.”

Mrs Hicks and her relatives have benefited from family support services and special bereavement counselling work, in liaison with Mencap, has been done to support some of Steven’s friends who have learning difficulties.

His family has also taken part in fundraising events such as Suffolk Santas, donated goods to the Stowmarket shop, and have a leaf on the new Memory Tree in Steven’s name.

Mrs Hicks said: “We will continue to support the hospice as much as we can. People in general aren’t aware what services are provided at St Elizabeth Hospice and how important they are. It costs £13 a minute to run and we realise what that minute means and what it meant to Stevie, it could be the most important minute in a patient’s life.

“For us it felt like a home from home. Stevie had everything and everyone he wanted came to visit and say goodbye. We felt we were in our own private world with Stevie but with the support and help he needed. We would have been lost without the hospice. We are so grateful he had that last time with no regrets, it was the best possible time we could have hoped for. The end of life is as important as life itself.”

Donate to St Elizabeth Hospice today to help us continue our work with patients like Steven.