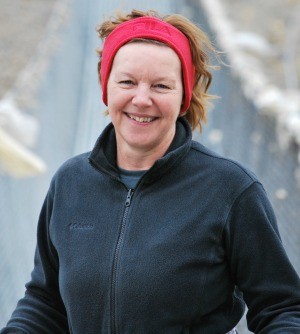 Norman Finbow has pledged to raise £25,000 for the hospice after his wife, Linda, received amazing care from the Hospice at Home team.

She was first diagnosed with a Malignant Melanoma in her leg in 2008 which was removed and she was fine for four and a half years. Then during a regular check-up in December 2011, doctors found some lumps in her groin. She had an operation in June 2012 on her lymph glands and she recovered well from the operation. But in July 2012 the doctor told Mr Finbow the cancer had spread and she had a two week prognosis.

“I didn’t tell her right away because she was so ill and I didn’t want it to push her over the edge. Our daughter was due to get married in November and Linda had put all of her energy into helping plan the wedding.”

“When I told her, typically she was more worried about the burden on me.  She said no way am I dying, I have got a wedding to go to.

“Our daughter got married on Saturday 24th November. Linda came into the hospice the next day and died on the Inpatient Unit on Tuesday 27th November, just a month after her 57th birthday.”

“We always knew that Linda was going to come in to the Inpatient Unit at the end. She did a living will and it always surprised me that she wanted to come in here, because we’ve got nurses in the family but she said that the care that she would get at the hospice would be perfect, plus she didn’t want her nearest and dearest to have to deal with everything.” 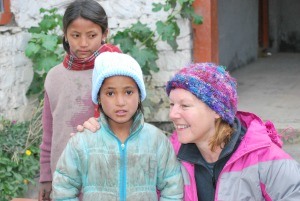 had to care for all of her needs. In the end she didn’t spend very long on the Inpatient Unit so we’ve got to be grateful for that.”

“The thing that was really helpful to Linda and me was the Hospice at Home service. I used to ring them up and within 10 minutes they’d be at our house. Without the Hospice at Home service, Linda would have been in a lot more pain for a lot longer. We always felt very much in the best hands and Linda loved the service that was given by the hospice, it was brilliant.”

Norman and Linda also took advantage of our OneCall 24 hour advice line and even used the service when they were on their holiday of a lifetime – a cruise stopping in Venice and Athens.

“At the end of our cruise when we got to Athens, Linda started getting a lot of pain in her leg. She was in excruciating pain and I had given her all the pain relief that I could and I thought if I give her any more I’ll kill her, so I called OneCall up and spoke to one of the guys and he very calmly advised me on how to help. And that’s the sort of service you get, they were brilliant.”

“There are not many people who aren’t touched by the hospice, but for the few who aren’t they can be quite frightened of a hospice, of what it means.”

“I think that people don’t like to think about the end game but when you’re caring for somebody or you have somebody dear to you who you know is going to die from that illness and everything has been done, all you’re interested in is to make sure that their final days or weeks are as pleasurable as possible and pain free because that’s all you can hope for and that’s what the Hospice at Home team and the OneCall service gave us.”

Mr Finbow and 15 of his friends and family are going to hike the Himalayas in Linda’s Legacy.

“Linda and myself have led five fundraising treks to Nepal since 1998 and I pledged to organise one last one in her memory. I hope to raise £25,000 this year; the trek is just one fundraiser.”

“I have recruited 16 Trekkers who have to raise a minimum of £500 for the hospice but we hope they will raise a lot more!”

“When I said to Linda about fundraising for the hospice and doing the trek, she said she thought it was a wonderful idea.”

“The trek will be from 23rd October to 6th November to coincide with Linda’s birthday on 29th October and on Linda’s birthday we will be putting up prayer flags in the village so the locals who knew her over there will be able to get involved.”

The 16 trekkers include Norman and Linda’s children, Kirsty, 31, and Alex, 28, and their partners, along with other friends and family.

“Two very good friends of Linda and mine, Carolynne Black and Val Garwood, have helped me plan the trek and they are my organising committee behind Linda’s Legacy and both ladies have trekked many times with Linda and myself.” 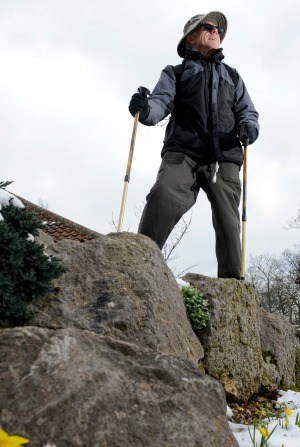 “Carolynne is a healthcare professional and as part of Linda’s Legacy she had an idea to take pictorial instructions to give to pregnant women in the villages we pass through to help them when giving birth and to look after the baby when it’s born.”

“Linda always loved meeting the children in the villages we passed through, and we thought this would be a nice way to leave her legacy.”

Mr Finbow has pledged to raise £25,000 because that is the cost of running the hospice for a day.

Norman is best known as Norman Lloyd, his rock and roll showbiz name from his days as a Radio DJ.

Norman took early retirement from his job at BBC Radio Suffolk as their Promotions and Marketing Manager in November 2012 to look after Linda during her final days.