For Maxine Gould, all her original anxieties about coming into a hospice have completely gone.
She said: “I have dispelled the hospice myth by coming here.”

After her first visit to St Elizabeth Hospice in Spring 2015 as a cancer patient, Maxine, 50, admits: “It is not until you access the services that you realise just what is being done.

“Because of the help and support I am being given, I am still able to be here and be me, both physically and emotionally.”

Maxine is a registered nurse and, as such, she has visited St Elizabeth Hospice several times on professional training days but she never imagined returning one day as a patient.

She said: “Being told that I had ‘probable cancer’ and seeing from the scans that there was no ‘probable’ about it, was the most stressful part of the process, worse than learning that it is terminal. You can never know what it feels like until it happens to you. Time really did stand still.” 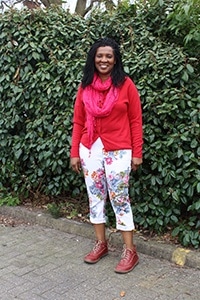 In Autumn 2013, having lived with a diagnosis of Irritable Bowel Syndrome for approximately six months, Maxine was finally told that she had bowel cancer, She had been getting abdominal pains and couldn’t stand for long; she knew that stress-related IBS was unlikely. Maxine is clear on one point: “I had pain which was causing stress, not stress that was causing pain.”

She feels that many younger people are given the IBS ‘tag’ when really doctors should be talking and testing to rule out bowel cancer before considering IBS, as its symptoms can mask bowel cancer.

“On hearing that I have cancer, I found myself reacting to life but not properly functioning. I made a funeral plan within a week – contacting a funeral home, asking a friend to sing on the day: I put up my Christmas tree early just in case I didn’t make it to December.”

Fortunately instead, Maxine found herself waiting for surgery, but with no real support so she took herself off to the library to read up on her condition. It was knowledge which empowered her again and when she had her first round of chemotherapy she couldn’t refrain from checking dosages herself. Through this taking of control, she began to rebuild her confidence.

She said: “I feel that I can influence diagnostic practice by speaking out. My advice to all medical staff would be to ‘never assume’.”

Maxine started to get involved in various support groups, including one specifically for bowel cancer patients and derives much strength from these and from listening to the stories of others. She also speaks at various forums with and for doctors.

“Cancer, in a snapshot, changes you. With it you suddenly start to take stock of life and appreciate people, life and the little things in it.”

Maxine comments: “The cross-referencing support of both the hospital and St Elizabeth Hospice is helping to keep me comfortable and provide me with a good quality of life.

“I decided, whilst in hospital, that I wanted to have treatment at the hospice. When I come here, I have all the help and guidance I need and I don’t feel alone anymore.”

Her first visit to St Elizabeth Hospice, took place on 1 April, when Maxine met with Dr Blaken with whom she now meets regularly.

“She is so forward-thinking,” enthused Maxine, “For my trip to Wales, Dr Blaken worked out a treatment plan in order for me to tackle the pain as and when it came. I call it my ‘hospice-in-a-bag’ kit’! It takes so much pressure off me. She even arranged for clinical staff in the area to have intravenous treatment ready for me if I needed it.”

She admitted to having felt extremely nervous before her initial visit to St Elizabeth Hospice but very quickly she relaxed.

“Everyone is so friendly, I even had nurses call me at the weekend to make sure I was OK and to check I have everything I need. I cannot fault the place.”

Maxine took advantage of a foot massage on her recent visit and is not averse to trying other therapies – and even the gym.

She has also had a music therapy session during which she recorded a harp track; she had never played the harp before, but, with Ray Travasso’s guidance and backing music, she was able to.
“He asked me to describe where I was in my head whilst playing; I told him that, as a scuba-diver, I visualised myself under the sea, watching sharks.”

Maxine has every intention of having some more music therapy and has agreed to take part in the hugely-successful Larch Project with local schoolchildren.

“I never want to regret missing a beautiful day”

Maxine fosters a very positive outlook on her life, wanting to live it fully and have experiences while she can. She says that she does not want to look back from her bed and wish that she had done more.

“Cancer isn’t a death-sentence; it teaches you to live life.”

Maxine’s mother and her 24 year-old daughter Astyn-Jerai, are both strong supporters for her. Whilst Maxine struggled to tell Astyn-Jerai of her diagnosis, her love and acceptance are clearly hugely important. Her mother has attended recent therapy days with her at a local Spa and her extended family provide Maxine with much of her strength.

Maxine agrees with all of the visitors to St Elizabeth Hospice about how the dining room is the hub of the place with staff, patients, families, volunteers and visitors all enjoying their meals together and the high quality of the food served by the catering team.

“It’s all delicious and fresh. The fish and chips make a welcome change to my recent liquid regime.” 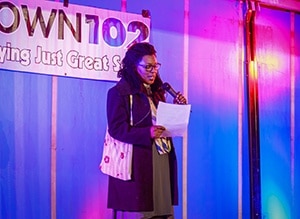 Maxine was keen to give back to St Elizabeth Hospice even before she started to use the services.

She volunteered to speak at the annual Midnight Walk fundraising event. Maxine was the first-ever patient-speaker who addressed the 1,400-strong crowd at ITFC and shared with them some of her experiences. Her audience listened attentively and many of them found strength from her words to help them around the more difficult moments of the course.

She explained, most powerfully, what it is like to have St Elizabeth Hospice to turn to for care and support. Watch the video of Maxine’s speech.