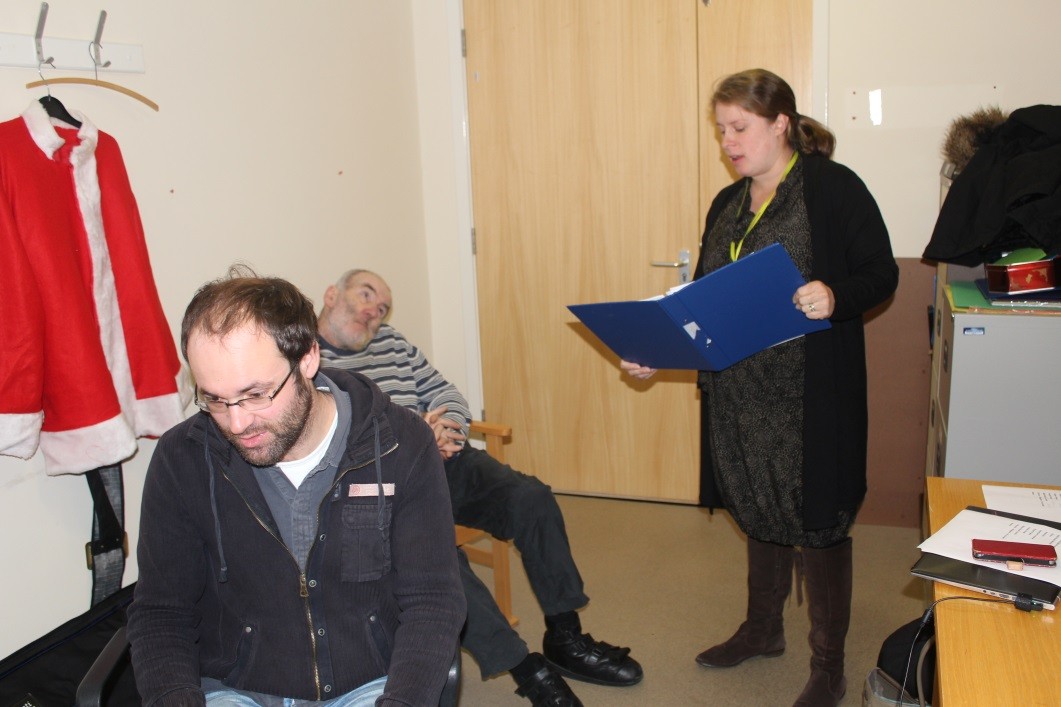 Nathan Williamson, (pianist) John Packer (composer), Daisy Williamson (music therapist)John Packer has been working with Daisy Williamson, a music therapist for St Elizabeth Hospice since the beginning of 2013 and has now begun the production of his first opera, ‘La Bella Rosa’. John, a day care patient at All Hallows Hospital, Ditchingham, has been playing the piano since he was 11. However, John never learnt to read or write music so the process of writing an opera has been a labour of love and a testimony to the enduring working relationship between him and music therapist, Daisy.

She said: “John has always been extraordinarily creative and then in April 2014 he started playing melodies on the piano which he had been writing for years and years.

“He would play a melody and I would transpose it for him. We then worked together on the dialogue and lyrics.”

Clearly, this process has taken quite some time, eighteen months to get the first of three acts completed.

Daisy explains: “As time moved on, John’s Parkinson’s disease became more advanced and playing the piano became more difficult for him. I have to note down tunes as he hums them.”

John admits to the opera having been 20 years in the making:

“It is in my mind all the time; it is constantly evolving. I have worked on the themes, the most important being love. It is a love story in the truest sense as it’s really about all the different types of love.”

‘La Bella Rosa’ is set in Tuscany, and focuses on Rosa, a vivacious English girl who comes to an Italian finishing school, whilst visiting an English family’s estate. She is pursued by two suitors, Enrico, a local nobleman, the other, an American suitor with ‘new money’ who wants to buy into the Aristocracy.

Music therapist, Daisy enlisted the support of her partner, Nathan, a composer and pianist, who took the melodic lines and turned them into piano parts which can later be used as full orchestral pieces. John worked with Daisy during his weekly visits, just playing melodies.

John’s wife, Liz, describes him as “a modest man who has always had a way with words. This debut performance is so important for John as through it we can see one of the true parts of him.”

When John was diagnosed with early onset Parkinson’s in 1992, he was 49 years old and had been CEO of Norwich City Council for three years Liz recalls:

“It was a stressful job and at the time we had four boys, aged four, ten, 12 and 14. John continued as CEO for another seven years, retiring in 2000.

“He always had an open door policy and a ‘can do’ attitude which meant that he achieved a lot in the time he was there.

“In 1999 he was awarded an OBE for services to Norfolk and Norwich and had to be convinced to accept it. I wanted him to have it so that he could see how he is valued.”

Both John and Liz are very appreciative of the respite provided by day care for them, Liz comments:

“The respite given means so much to us. It is truly amazing just how many people help by volunteering.”

I loved the way everyone joined in

Writing has always been an important part of John’s life; he wrote a play about Rosa Luxemburg and has always had a passion for poetry, his favourite poet being Andrew Marvell. John attended various Arvon creative writing courses around the country, beginning with poetry before graduating onto writing song lyrics. He worked with acclaimed writers as: Willy Russell, John Fairfax and Ray Davis.

Having the first act of his opera performed for the very first time by Daisy, Nathan and St Elizabeth Hospice staff, is a real vote of confidence for John. He said:

“I now know that I can produce something good. I could really hear the melodies as I listened to the performance.

“I loved the way everyone joined in. All those people have made a difference.”

John started by writing two songs which sparked off the rest. He then explained:

“I wrote a 1930s song called ‘I’ll wait for you’ for my wife, which she really likes and will incorporate it into either act two or three.”

“It’s really important to be able to see the person inside, behind the illness”

Liz loves how this project has kept ‘the real John’ at the fore, as living with a progressive illness like Parkinson’s is difficult, she said:

“It is really important to be able to see the person inside, behind the illness and that is what is being done here at St Elizabeth Hospice.”

John and Liz continue to feed their creativity; they are both learning Spanish so that they can welcome their prospective Columbian daughter-in-law into the family properly. John’s next step is to revise Act 1 before moving on to Act II.

Both John and Liz are under no illusion about the effort required and the support he needs to do this, but with the help of St Elizabeth Hospice, amongst others, they will endeavour to keep the creative process moving.