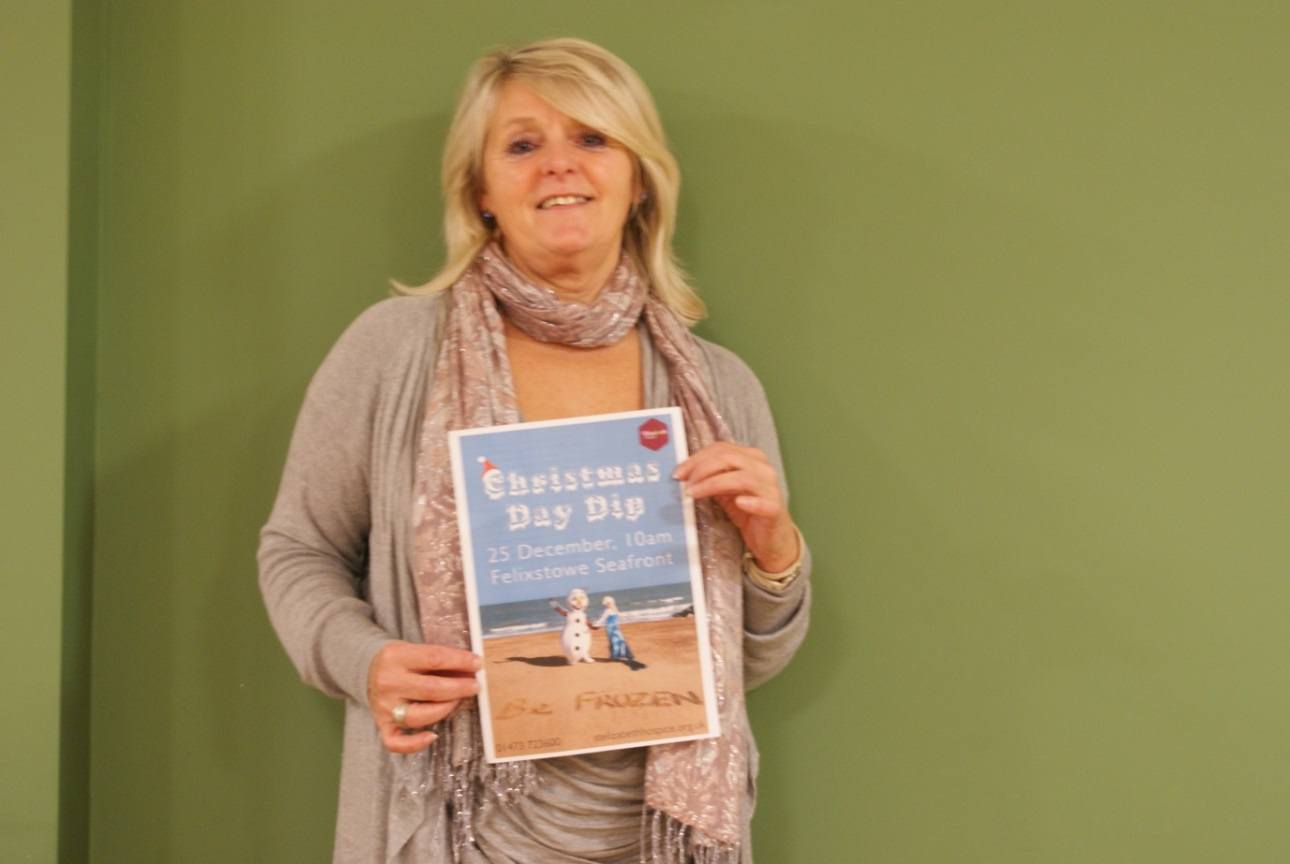 For Judith Hammond, 57, Christmas Day is not an excuse to relax in the warmth of her home all day. For the past six years she has taken part in the St Elizabeth Hospice’s Christmas Day Dip in Felixstowe. She said:

“Last year I went for a two mile run before doing the dip. My daughter, Deavan, who was also taking part with me, made sure she pushed me in properly once we were in the water!”

Judith has raised around £400 through her participation in this festive event alongside the annual Midnight Walk which she has completed twice. Judith intends to continue raising funds for St Elizabeth Hospice as she says:

“I want to do something to help a local charity rather than a national concern and raise awareness of what is being done for people in my local community.”

The best of friends

Judith’s ex-husband Steven Hammond, 55, or ‘Hammy’ as he was affectionately known, was cared for at St Elizabeth Hospice in July 2014.

“Hammy and I met when we were both drivers in the RAF. After 14 years of marriage, two daughters, Deavan, 23, and Kerstin, 27, and a divorce, we still remain the best of friends.

In hindsight, Hammy’s illness began a long time before he was diagnosed with Multi System Atrophy; his walking became strange; he started dropping things; slurring his words and his blood sugar levels kept plummeting. None of these things happened regularly, so we were never alerted to them as symptoms of something connected.”

The real concern came when Steven’s driving began to suffer, it was his reversing of his lorry which first started to become a problem, then he began to wander over the white lines. That scared him as he had always been such a good driver. He even veered across the road one day.
His original diagnosis was one of Cerebellar Ataxia (a virus which attacks the brain and affects speech and balance) which saw him gradually deteriorate resulting in a fall from his mobility scooter.

From here, Steven was finally diagnosed with MSA, which Judith describes as being “like parkinsons, motor neurone disease, and multiple sclerosis all rolled into one.”

Steven coped with this progressive illness with the help of his girlfriend and wonderful carer, Ollie – a young man who looked after him so well and with whom he got on famously.

Judith explained: “They shared the same crazy sense of humour and got on like best mates. Hammy loved motorbikes, he owned a total of 500 during his lifetime. He loved to buy and sell them and spend hours in his garage, tinkering. He was an active man who enjoyed his life.”

The improvement was brilliant

Steven was first referred to St Elizabeth Hospice by his GP. He went in suffering with pneumonia. Judith said: “He was scared at first but then he improved so much whilst he was being looked after on the inpatient unit that he began to relax. He had a side room and nothing was too much trouble for the nurses there. We were allowed whatever number of people in the room we wanted.

The treatment Steven received for his pneumonia enabled him to return home for a short time which was much appreciated by Judith and their children.

Judith explains: “It is as though St Elizabeth Hospice is a comfort blanket; whatever goes on outside is left there. It is completely patient-centred. When he left after that first stay, I commented to my girls that their dad hadn’t looked so well in years. The improvement in him was brilliant”

Steven spent a further two weeks on the inpatient unit on his next visit. Judith remembers:
“He returned again a few months later to a level of care and attention that was absolutely bang on. I could see that each time he was looked after in the hospice, Hammy’s speech improved tremendously, as did his co-ordination and movement. I think that it was because he was receiving so much specialist care.

“He felt emotionally and physically safe there and this must have helped his ability to improve overall.”

Judith remembers this second stay in the inpatient unit very clearly, she said:
“There was such tenderness in the way in which Hammy was cared for, in every little thing; it was beyond caring; a different way of nursing. Patients were treated as individuals; there was so much understanding and empathy.

The staff on the inpatient unit were so aware of being delicate with people; they are very sensory-aware and this really helped Deavan, who was feeling very fractured at the time.”

Sadly, Steven was not in St Elizabeth Hospice when he died in July 2014, which is where he wanted to be.

“When we took part in the Christmas Day Dip last year, Deavan told people on the beach that she was doing it for her dad, she said that it helped her to remember him.

This year, I shall be running into the sea on my own and will be thinking of other ways to raise money for the hospice to support the fabulous work they do for local people. Maybe a sky dive or the London to Paris cycle ride in 2017; whatever it is, it will be to raise awareness in the community that St Elizabeth Hospice serves.”