“Looking back, I’m so grateful for the wonderful care that my mum Sarah received from St Elizabeth Hospice during her final few weeks. Mum’s time spent on the inpatient unit was so positive and it was the first time in years that her pain was under control, enabling her to be her old self again. To spend that quality time together before she died was priceless and means so much to my younger sister and me.

“Mum fought cancer for six years, initially being diagnosed with breast cancer and going into remission, before it returned in her liver and thyroid. She did go back into remission again but unfortunately it reappeared in her liver for the final time. She never gave up though and continued to endure countless rounds of chemotherapy, radiotherapy and operations, but did so with courage and an inner-strength that amazed everybody until the very end. Mum was willing to do whatever she could to be there for my sister and me.

“At the start of this year it became apparent that the chemotherapy wasn’t working anymore and mum was slowly becoming debilitated. She was determined to remain at home so I acted as her carer, but things quickly deteriorated and she was in and out of hospital with sepsis and fluid build-up, which was very distressing for us all, especially mum. Throughout all of this, mum’s tenacity was phenomenal.
“The hospital initially referred mum to St Elizabeth Hospice for pain management, as together we agreed we didn’t think we would be able to cope at home by ourselves with no support, and that I couldn’t give mum the professional care she needed and deserved. When mum’s condition deteriorated and it became apparent that she would require palliative care, the hospice were so supportive and within a few days they had arranged a bed on their inpatient unit.

“When mum arrived she was very ill, so she was put into a lovely big side room while the medical team worked hard to get her pain under control. It was such a relief when a couple of weeks later mum started to respond well to her medication, making her so much more comfortable and relaxed. It was the best we’d seen her in months – she began to feel at home and became more accepting of the fact she was going to die. She started wearing makeup again, watching telly, eating, and most importantly to mum, enjoying the odd gin and tonic in the evenings with her friends and me!

“As mum started feeling more herself and her pain started stabilising she was moved on to a ward as she wanted to be around other people. This turned out to be a great decision as she soon made friends with the other patients and their families. Mum was a very sociable person but for the past few years she had become very reclusive due to her health, so it was heart-warming to see her chatting to others like she used to. It was like she’d found a community at the hospice and all of the staff and patients treated each other with such dignity and respect – they loved her sense of humour that started to crack through once again. She formed a great friendship with a gentleman on the ward and they would spend hours putting the world to rights.

“With mum being cared for by the hospice it gave us a chance to all be a family again, as well as giving us the right professional support to come to terms with knowing mum was going to pass away. We were always welcome to stay for as long as we wanted and my sister and I even slept over some nights. The staff made us feel completely at home and they were so caring towards all of us.

“Mum particularly loved the hospice garden and on the days she was feeling up to it I would take her out there with our friends. She also visited the day centre in her last week, once with my godmother and once with her mum and absolutely loved it. She said: ‘If I had any hair or nails, I’d totally go in there for a free haircut and manicure!’ One Friday evening, on the ‘wellest’ day she had, mum, our close family friend and I gathered out there on a bench, laughing and joking like old times – it is a memory I will cherish forever. 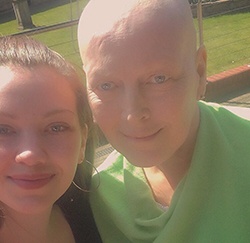 “Unfortunately, the next day mum’s health deteriorated as she got pneumonia and we were told the end was near. The nurses moved her back in to a big side room, with a beautiful view of the hospice garden, and her loved ones, including my sister, two uncles, nan, mum’s close friend and myself gathered by her side.

“We camped out with mum in her room, watching TV, eating pizzas, chatting all together and keeping things as relaxed and fun for her as possible. We were also given a hospitality room so we could take it in turns to rest and take some time out. After two days, on the 7th of May mum peacefully died with us around her – it was just as she would have wanted.

“There was no panic or rush that day. I got to sit by her side and hold her hand and talk to her on my own. We were able to spend hours with mum, saying our goodbyes and coming to terms with our loss. Our family felt so well-supported by the hospice staff and when we left they gave us a number to call if we needed anything as well as a pack of advice.

“Losing our mum at the age of 54 has been so painful, but the fact that we had those last couple of quality weeks together, as well as knowing mum was as comfortable as she could possibly be, makes it that bit more bearable. Since mum’s death I am continuing to be supported by the hospice through their bereavement services and I know they are there for my family if we need them. I’m thankful to the hospice for maximising mum’s quality of life at the end and ensuring her death was both calm and dignified.”