For Rachael Spurling, contacting St Elizabeth Hospice on behalf of her mother, Frances, was a daunting idea. Like many people, until she had experience of the hospice’s care, she felt anxious about the whole concept. However, now she has taken that step she explains: “It’s nothing like I imagined. I will always recommend St Elizabeth Hospice now.”

Earlier this year in February, Frances was diagnosed with bowel cancer which had spread to her liver and lung and in May needed to spend a month in hospital. Frances was desperate to return home, which she managed in June, where she made significant improvement.

However, several weeks into November, Frances spent a particularly bad night with sickness and stomach pains during which she called Rachael. It was at this point that Rachael recalled a recent conversation that she’d had with a friend whose husband had suffered with bowel cancer. He had been helped by St Elizabeth Hospice’s community nursing team. Her friend had described the team as being ‘absolutely marvellous.’

Remembering this endorsement, Rachael phoned St Elizabeth Hospice’s OneCall, which is available for 24 hour specialist advice, explaining her mother’s symptoms. Immediately, Pip, who was on duty that night, rang back and advised Rachel exactly what she needed to do to help make her mother comfortable.

Rachael said: “It was so good to have someone help me, reassure me and tell me what to do.”

Pip then said: ‘I think you need a visit; I’ll come out straight away.’ She administered an anti-sickness injection from the pack already kept at home and then set about reorganising Frances’ medication to better suit her current situation.

She even arranged a blood test to be taken by the district nurse on a Sunday which her daughter then took up to the hospital.”

Pip kept in regular contact with Frances and Rachael after that initial visit and then suggested that a spell in the inpatient unit at the hospice may help to get her medication and pain management under control. When a bed became available a few days later, Rachael was happy to bring Frances in.

“What a wonderful, calming experience it is to be here. We were put at our ease straight away. The staff here must be hand-picked for being such caring people; they are all so personable, well-trained and attentive.” 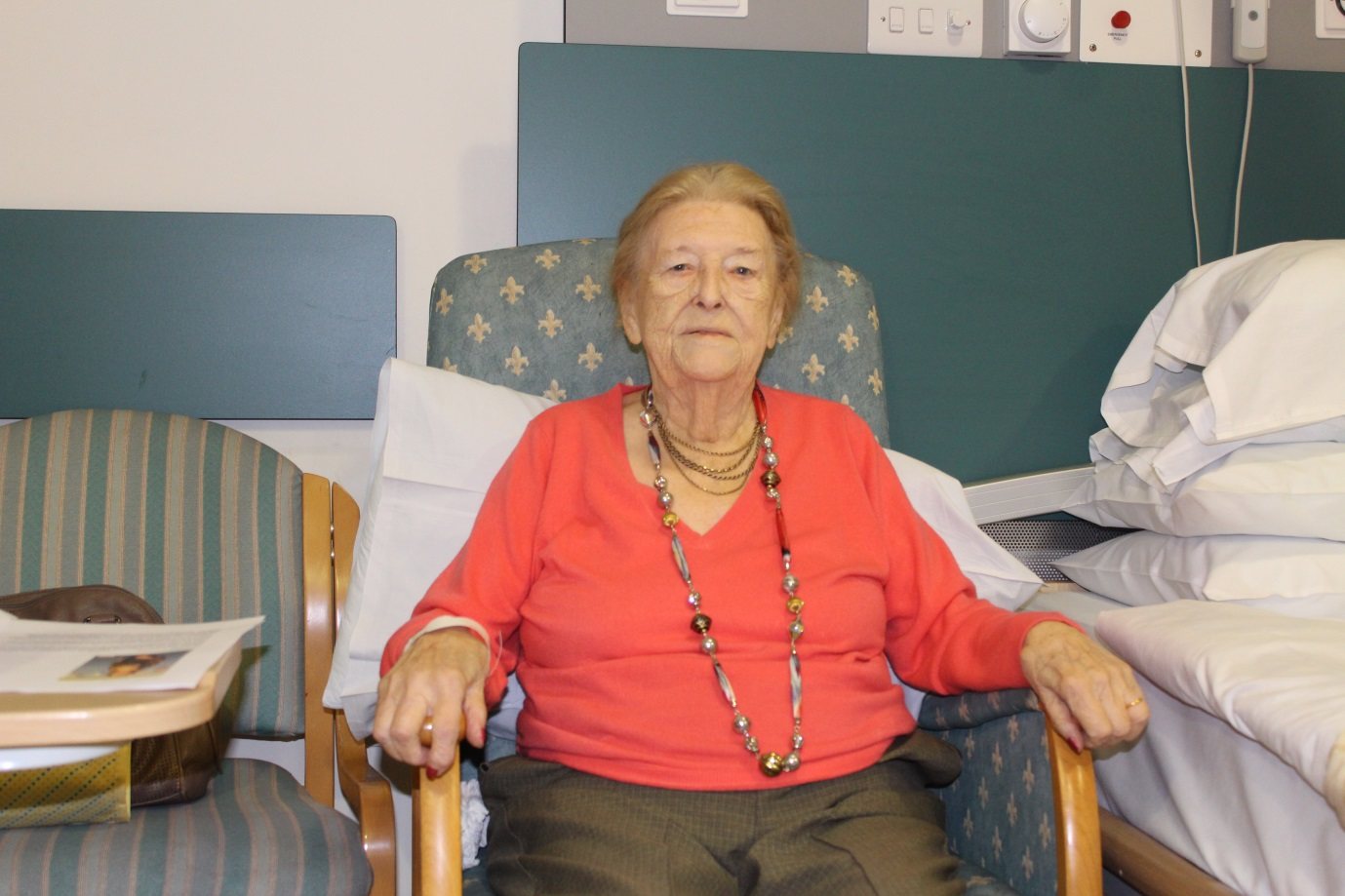 You feel so welcome

Rachael now wonders why she felt so apprehensive because she can see how happy the hospice is and how “no one is grumpy!” Frances and Rachael both enthuse about the food being “excellent.”

“The catering staff are so friendly; no one ever forces Mum to get up by a certain time; there are always staff on hand and nothing is too much trouble.”

Rachael and Frances are extremely impressed with the expertise of the clinical staff,

“Dr Dennis Murphy spent three quarters of an hour with Mum when she was admitted. He was patient and really listened to her, taking everything in and giving her as much time as she needed.”

Having experienced hospice care now, first-hand, Rachael is determined to fundraise in the future to help keep the service available to others.

“When you see how well patients are looked after, you want to get people in to see it. It is spacious and private in the inpatient unit; you can make tea and coffee whenever you want; you are made to feel so welcome. Mum particularly enjoyed being able to have a little bowl of tasty ice-cream whenever she fancied it.”

“I cannot believe how marvellous this place is. People say that there’s nowhere like home, but this place is a close second.”