A local dad will be taking part in St Elizabeth Hospice’s Midnight Walk next year with his daughter. 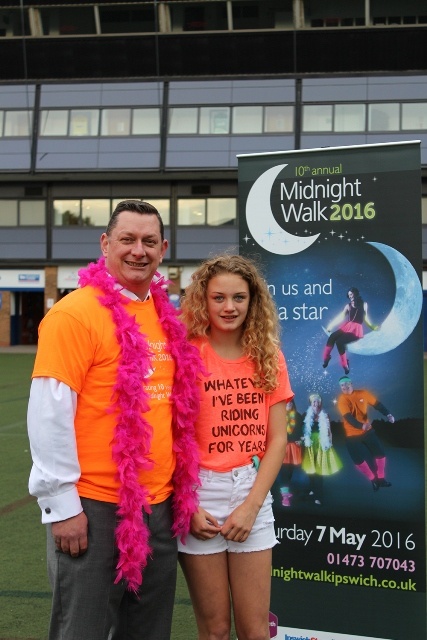 Steve Banks, 42, of Ipswich, and his daughter, Ellie-Mae, 13, are walking in memory of Steve’s dad, who was cared for by the local charity.

They were amongst the first signed up for St Elizabeth Hospice’s biggest fundraising event of the year, the Midnight Walk, which will take place on Saturday 7 May 2016.

When Mr Banks’ father, Bernie, was diagnosed with lung cancer, he
moved in with him and was regularly visited by hospice nurses.

Mr Banks said: “When dad became ill, I had him move in with me and the hospice nurses looked after him at home. Dad was close to going into the hospice, but in the end he benefited from their care at home.

“Taking part in the Midnight Walk is our way of giving back and helping raise awareness of the hospice. It’s nice to be able to give something back.”

The father-daughter duo has taken part before, walking the eight mile route earlier this year.

Mr Banks added: “This year was really good fun, especially with the pirate theme! Our favourite part is the end – the relief to know you’ve finished and raised much-needed funds for a great cause. We also really like the Royal George refreshment stop as it’s a great opportunity to stop and chat with people to see how they’re finding it and why they’re taking part.”

2016’s Midnight Walk will be a special celebration as it marks the 10th birthday of the hospice’s flagship event and there will be a neon theme to add to the birthday atmosphere.

As usual, men and women can take part and choose to walk either the five, or new, ten mile circular routes starting and finishing at Ipswich Town Football Club.

For the first time, the age restriction has been lowered, and now youngsters aged ten and up can take part in the Midnight Walk with their families.

Ellie-Mae is looking forward to walking again this year with her dad and they’re hoping to get a bigger group together this year, possibly with some of her friends.

Ellie-Mae added: “I’m really looking forward to the neon theme. My favourite part of the Midnight Walk is the start, when everyone is together doing the warm up and then we all set off on the walk in unison.”

Some people decide to walk as part of a team of friends, family or colleagues but others walk on their own as part of a personal challenge. Whichever you choose, there is always a friendly atmosphere and a great sense of togetherness on the night.

Catherine Sheppard, event organiser, said: “We would love everyone who has ever taken part, whether than was nine years ago or last year, to join us for this special birthday celebration, and we would love to see lots of new faces too, joining us for the first time.

“All the money raised from the event goes towards helping Suffolk families living with a progressive illness. This year we raised £150,000 with 1,400 walkers, and we’d love to raise a bit more than that next year.”

Find out more and sign up now at www.midnightwalkipswich.co.uk