She had been cared for in the hospice on and off over a number of months and then spent her last five weeks on the in-patient unit.

Tracey’s sister Debbie said “Everyone was absolutely wonderful and they couldn’t have made things any easier for our family.”

Debbie Cadman, 46, of Needham Market had been diagnosed with breast cancer herself in November 2007.

“I was going through my first lot of chemo when Tracey was diagnosed with terminal gall bladder cancer. It was a very difficult time for us, each of us protecting the other from what we were going through. My mum, Mary was there for the whole family, she was an absolute pillar of strength.”

Having both gone though chemotherapy and used syringe drivers, the family discovered that Needham Market Doctors surgery only had one syringe driver available to patients making it more difficult for people to leave hospital and have treatment at home. They decided that they would fundraise to buy one for their surgery (just over £1000 each) and the family started making cards and other crafts.

Sadly, Tracey died before one could be obtained, but after organising a garden party in July 2009, the family was able to buy not one but two syringe drivers. Tracey was a founding member of The Needham Market First Responders, so would have been absolutely thrilled to still be putting something back into the community.

As their local District Nurses sometimes have a problem finding houses in rural locations, they also bought four sat nav systems for them. 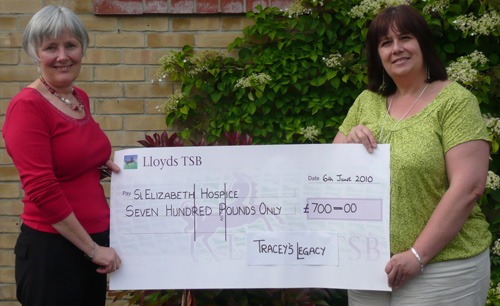 The family has continued to fundraise under the banner of ‘Tracey’s Legacy’ for St Elizabeth Hospice. They presented Revd Jane Kingsnorth, the hospice chaplain, with a cheque for £700 when they attended a memorial service at the hospice a year after Tracey died.

Debbie is now making jewellery as a way of fundraising and a second garden party was held in August. Her partner Pete Squirrell and his friend Andy Barber also held a golf day at Waldringfield Golf Club. They raised over £200.

Debbie added “Now that we have got all the ‘firsts’ over, a group of my friends and I are planning to organise a ball, date and venue yet to be decided although we are bursting with ideas.”