Eighteen months ago, Chelsea Scarlett didn’t know anything about St Elizabeth Hospice. Like most people, she’d never known anyone who had needed to use their services and therefore had no idea what the charity offered the local community. 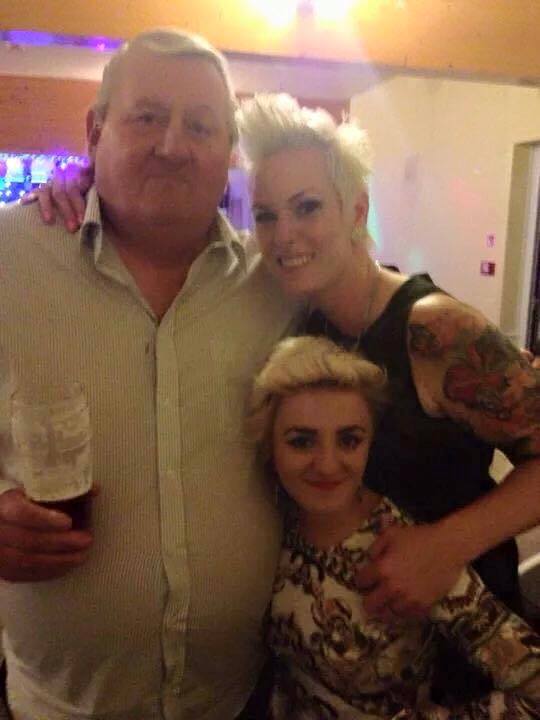 Today, Chelsea appears as the star of the charity’s flagship fundraising event, the Midnight Walk, and shares her story in the hope it will inspire others to join her on the route on Saturday 20 May.

In February last year, Chelsea’s Grandad, Eric Vince, who was 70, was diagnosed with lung and lymph cancer. Looking back at this time, Chelsea reflects: “I remember him saying ‘I don’t want to go to the hospice. I want to stay at home, leave me at home’. We didn’t push him and, in the beginning at home is where he stayed. My family and I looked after him but we had to work and it was hard for us. As time went on, he needed breathing apparatus and other things so we felt he needed to go to the hospice.”

The family contacted St Elizabeth Hospice on Foxhall Road in Ipswich and a place was arranged for Eric. He was quickly admitted and received care around the clock.

Miss Scarlett said: “Although he didn’t want to go at first, he was pleased he did. When he arrived at the hospice he actually was really impressed. I remember him coming in and saying ‘oooh, this is quite nice; this is like home’. He had a TV and he could have an alcoholic drink if he wanted to. It was nice for him. He loved it and we liked it too. The staff there not only looked after my Grandad but they also made us feel so welcome as well. I’m so glad there was a place for him there.”

One of Chelsea’s favourite memories of her Grandad at the hospice was the stash of sweets he used to flirt with the nurses. “He loved all the nurses” she remembers. “He had sweets on his table by his bed and, when they came in to look after him he’d say ‘oh there you go, have a sweet’ and I was like ‘oh, OK Grandad. Stop flirting around with the nurses’. It was great. He loved it. He stopped feeling so ill when he was there.”

Eric was with the hospice for a couple of weeks before he died in April. Chelsea looks back to this time and says: “It was better than him dying at home. Everyone was here. The area around his bed was packed with family and I thought that was so good because so many places might not let you do that. We stayed there for as long as we wanted and it was really nice.

“The staff were so kind to us. We knew he was going to pass away and they said if he doesn’t pass today you can all stay tonight. They weren’t going to kick us out and we really appreciated that.”

While her Grandad was in the hospice, Chelsea told him that she was going to take part in the charity’s flagship event, the Midnight Walk, to help raise money so that other families like hers could be looked after in the same way.

Talking about taking part in the event last year, Miss Scarlett said: “I had to do it! I’d promised him I would so I had to see it through. That year, there was a five mile route and a ten mile one. I did the ten.

“The atmosphere was really good. People are always cheering you on and those driving around the town beep at you and it’s really, really good. It eggs you on a little bit.

“I’m going to do it with my mum this year. My Grandad was her dad. My boyfriend and my friend may also join me again. My mum’s really excited to do it this year as well.

Those who have seen the Midnight Walk banners and posters around the town may recognise Chelsea from these. St Elizabeth Hospice asked her to be involved with the walk this year and she jumped at the chance to cover herself in neon paint for the photos.

“We had so much fun” she said. “I thought the eyelashes looked really cool. They put this special make up on them and it picked it up on the photo. It looks great.”

One of the highlights of the walk for many is the visit to the hospice along the route. When walkers collect their t-shirts, or have them sent to them, they will also collect a memory tag to place on a tree as they arrive at the hospice on Foxhall Road. In 2016, Chelsea placed a tag in memory of her Grandad. “I’ll do that again this year” she said. “That was beautiful. It was all lit up. It was so lovely. That was a really nice idea.”

Chelsea is encouraging everyone to sign up to the Midnight Walk and take part in the neon themed event around the streets of Ipswich on 20 May. She also hopes that her story helps anyone who may know someone who is about to go to the hospice. “Hopefully someone will read this and, if they’ve got a family member who’s going to St Elizabeth Hospice and they’re worried, they can read my Grandad’s story and think actually, that’s alright. We can be there for our family member when it’s time.”

“That’s all they need to know, because we thought, ‘are we going to see him’. Even when he died, we still got to see him. The next day we got to go in the viewing room and they made him look lovely with a rose in his hand. I thought ‘they’ve gone to a lot of effort’ and we could spend as much time as we wanted. They didn’t rush us at all.”

If you’ve been inspired by Chelsea’s story and would like to sign up to the Midnight Walk visit midnightwalkipswich.co.uk. Sign up before 31 January to take advantage of the early bird discount where you’ll receive £5 off your entry.