A grieving father has helped raise more than £500 for St Elizabeth Hospice in memory of his daughter Kate Crooks. 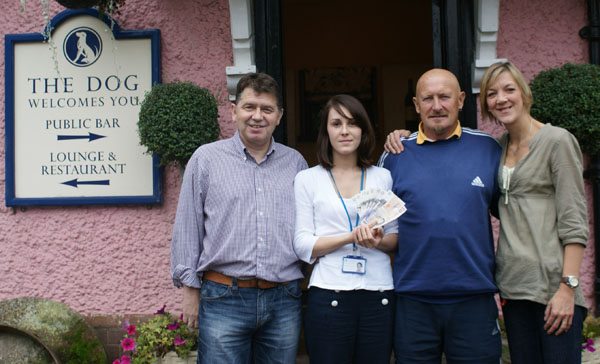 Kate worked at the Hospice in a variety of roles including administration and IT.

She died aged 33 on the in-patient unit on October 10th 2009 after suffering a rare form of ovarian cancer, leaving her husband Barry and two young children Kane and Meave. She had accessed many of our services including Hospice at Home, outpatients, complementary therapy and family support.

Earlier this year her father Bob Pugh, who has had a shaven head for 12 years, agreed to grow his hair to raise money for the hospice.

Mr Pugh, 60, a retired PE teacher, was spurred on by his friends Chris and Sue Barber who, like him, are regulars at the Grundisburgh Dog pub.

Mr Pugh, who lives in Grundisburgh, said: “Kate spent her last three weeks in the hospice and the staff there were brilliant. The care she received was exceptional. When Chris asked me to get sponsored to grow my hair I said no at first, but when they suggested I do it for the hospice I changed my mind.”

Mr Pugh grew it for six months and it was collar length before he had it shaved off at the pub by bar manager Tracy Root.
Pub regulars and staff at Farlingaye High School in Woodbridge, where Mr Pugh used to teach and still goes back as a supply teacher, all sponsored him helping raise £530.