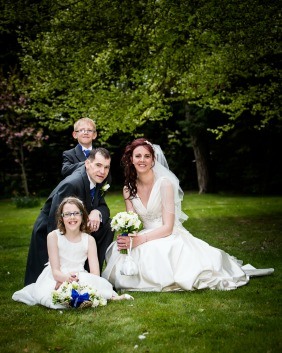 From the day Amy Graham met Ryan through mutual friends in March 2012, they hit it off. But soon afterwards he was diagnosed with terminal stomach cancer.

Determined to have a future, he proposed to Amy with a ring-shaped Haribo sweet! Less than a year after meeting they were engaged. They were married for just three months before he died – aged just 32.

Mum-of-two Amy, 30, (born Jan 1984) of Needham Market, said: “Ryan was really sick one morning so we went to Ipswich Hospital where they did an endoscopy and they told us he had an ulcer. He had a biopsy taken and days later we called the Hospital and we were told it was a tumour.

“Things then happened very quickly. He was referred to Addenbrooke’s Hospital and on 20th February 2013, they told us the stomach cancer was terminal. Then by the beginning of March we were engaged!

“I can laugh at his proposal now, but I didn’t at the time. After the diagnosis, I was ill, and had been in bed. I was standing in my kitchen and as I turned around Ryan got down on one knee and proposed to me. I told him to get up off the floor and stop being so stupid before I registered that he’d got this Haribo ring in his hand. 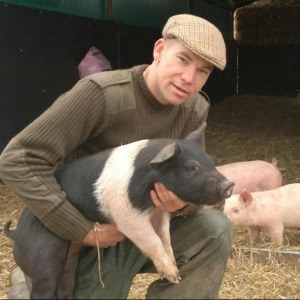 “The next day we went into town and picked a proper ring, so it was very romantic. I’ve still got the Haribo ring, I put it in the box my real ring came in.”

The couple planned their wedding in just six weeks. They got married at Thurston Grange in May 2013.

Shortly after the wedding Ryan was referred to St Elizabeth Hospice. One night when he was in pain Amy’s out of hours’ GP service asked her to called the St Elizabeth Hospice’s OneCall 24-hour advice line. Clinical Nurse Specialist Pip Davies went to their home to help.

“That night, Pip came out to us, and that was the first we knew the Hospice existed. The first time we came to the Hospice was for an outpatients appointment where Ryan’s medication was changed. It was more of a lifestyle change we went through after that, learning a new way of living.

“A Hospice at Home team nurse regularly visited us to check the medication and for a few weeks Ryan was OK. But when he took a turn for the worst we were advised Ryan should be admitted to the Inpatient Unit for a medication review.

“We told him he was coming in for just three days because he didn’t want to come in. I think we both had the idea of the Hospice as a place you go into and you don’t come out again. We sat in the car park for nearly an hour because neither of us wanted to get out of the car and come in. We didn’t know what was going to happen, if he was going to come home again and we were wondering, is it that bad and that’s why they want him in – but it was just the case of he was better being in the Inpatient Unit. He was in the Hospice for a week.

“In July he came back into Hospice again for a week. He came out for the weekend for a friend’s wedding and he was meant to come home but he said he couldn’t, he didn’t feel strong enough and that he felt a hindrance being at home and it wasn’t fair on me and the kids. I think mentally he knew that he was very unwell at that point.

“I was told that he probably had a week to live, so if I wanted him home, he needed to go now. Ryan had always said he wanted to be at home, and that’s where the kids wanted him to be, so the next day he came home.

“Without the Hospice at Home Team, it would have been completely impossible for Ryan to have his wishes and be at home. We couldn’t have coped with him at home without the Hospice girls and the whole team doing what they did. Ryan used to call them ‘angels in disguise’.

“Leslie Jefferson was amazing. If I could bottle what she’s got, I would be a millionaire. I would call her and she’d be at my back door within minutes. You’d blink and she’d be upstairs, I don’t know where she gets her passion from, but she was absolutely incredible. All of them were.

“When her birthday finally arrived on the Friday, Shellie went up to see Ryan just before we did her birthday cake because she said she didn’t want to blow out her candles unless Ryan could see her. I don’t know what she said to him, but she came down and said to Ryan’s brother, ‘big Ryan wants to talk to you’, and about 10mins later they appeared at the bottom of the stairs, so he sat in the dining room with us for about an hour.

“Then the next day he just completely changed, it was as though he had wanted to get to Shellie’s birthday, he’d done what he wanted and now it was time to go.

“The last time Ryan was in the Hospice on the Inpatient Unit he planned his funeral, right down to the songs. He organised everything, we even set up a St Elizabeth Tribute Fund together to say thank you.

“We looked at how much it costs for a nurse for a day and worked out Ryan had received around £50,000 worth of care, so that’s why he wanted the Tribute Fund, you can buy the staff bunches of flowers or card, but really no matter what you do or say we can never thank the Hospice for what they’ve done for me or the kids, little Ryan, aged nine, and Shellie, or Ryan.

Amy’s aim was to raise £10,000 by the first anniversary of Ryan’s death – but that target was smashed after just nine months. 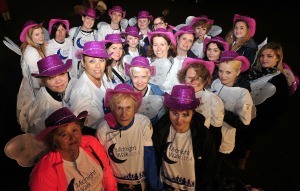 Her team of 22 ‘Ryan’s Angels’, including her mum, sister, and Ryan’s sister, took part in the Midnight Walk 2014, the week after what would have been Ryan and Amy’s first wedding anniversary. They raised over £4,600 in sponsorship alone for walking the thirteen miles.

Amy’s next challenge is to trek across the Sahara Desert to raise more funds for the Hospice.

She will join a team of 12 others experiencing the stunning landscape of the Sahara Desert in October 2014.