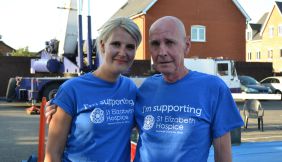 An inspirational hospice patient and father has braved a 200ft bungee jump to raise money for charity.

Remarkable 61 year old Colin Ely took part in the jump at the Brickmakers Arms pub in Spring Road where the world’s highest mobile bungee jump was held in the car park.

But incredibly, Mr Ely took part despite being told in January this year that there was no more treatment available for his lung cancer, which he has been tackling for the last two years.

Proud daughter Laura Fuller, landlady at the Brickmakers Arms, had originally planned to take on the jump for her dad, but couldn’t be more proud of her father who she describes as “inspirational.”

She said: “It was absolutely brilliant, and just amazing to watch him do it, people were even watching in the street!

“A lot of our customers had found out about his condition and I was going to do it for dad, but when he asked his hospice nurse she said “go for it!””

To date, Mr Ely has raised more than £1,900 for St Elizabeth Hospice, which has provided ongoing care and support to Mr Ely while he has been battling the condition.

Mrs Fuller said: “I think he was overwhelmed by the support from everyone, and people weren’t shy of putting their hands in their pockets.

“The last six months have been hard for him but it has been an ongoing battle and we are just so proud of him.”

The family now hope that Mr Ely’s remarkable efforts can be an inspiration to others who are also suffering.

Mrs Fuller added: “Just because he has been fighting this cancer, it doesn’t mean he can’t do this.

“People have bucket lists and this was one of those things on his.

“His condition hasn’t got in the way of him doing it, and there have been lots of comments on Facebook saying how incredible he is – he is an inspiration to us all.”

A number of people had also signed up for the jump to raise funds for their chosen charity, while a barbecue and family entertainment was also held on the day.

Danny Thorrington, partnerships fundraiser at St Elizabeth Hospice, said: “We would like to say a massive thank you and well done to Colin Ely and his family and friends for organising the bungee jump and raising such an incredible amount for the hospice.

“Colin was absolutely determined to do the jump and we’re so glad his hospice nurse have him the go-ahead.

“At the hospice we are always eager to help our patients live life to the full and will do everything we can to help them achieve personal challenges like this.

“All the money raised from the jump will go towards providing care and support to local people, like Colin, living with a progressive illness such as cancer, motor neurone disease and heart, lung and kidney disease.”