Christina, whose husband Andrew was cared for in the Inpatient Unit for nine weeks, still comes into visit the nurses and staff and says that she does not have bad memories of being here.

“Everyone at the Hospice has time for you: doctors, nurses, cleaners – whenever, wherever.”

“Our children, Oliver and Grace have fond memories of movie and pizza nights with Daddy at the Hospice. We would settle on and around his bed in his family room with the kids on bean-bags, eating ice-cream and watching movies.” 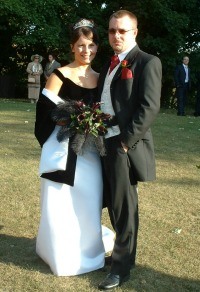 Known to his mates as ‘Wisey’, London-born Andrew met Christina through a mutual friend.
Their first date was at The Curve Bar in Ipswich and within three months of seeing each other, they were talking of children, even to the extent of choosing their names!
18 months later in September 2003, after Christina accepted his proposal at the top of the Empire State Building, they were married at Hedingham Castle.

Their two children Oliver and Grace arrived shortly afterwards, and the Wise family was complete.
But in August 2011 Andy was diagnosed with Renal Cell Carcinoma.

Andy had spotted blood in his urine and initially, begun treatment for kidney- stones, but, whilst waiting for the scan results, he was rushed into hospital, suffering from excruciating pain.

At this stage, Andy expected to make a full recovery; he was asked to participate in a clinical trial at Ipswich Hospital and agreed because of the reassurance which the regular check-ups would give him.

He had lots more scans but by Christmas he discovered that it had spread to his lungs, chest-plate and lymph-nodes.

Christina comments that he never asked to where it had spread nor did he enquire about how long he may have left.

She said: “It was a roller-coaster from here with everything speeding towards you. There was medication to reduce blood-flow so as to stop growth, tablet-form chemo; horrific.” 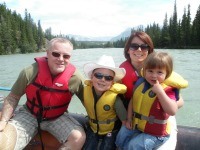 When Andy’s medication stopped working, he went onto a second line which gave him fewer side-effects but did make his hair go white. Christina called him her ‘Silver Fox’.

Andy remained on this treatment for a year, moving on to his final concoction of drugs for only a few months before he was told that they had stopped working.

His only hope was to accept a second Clinical trial at Addenbrookes Hospital, Cambridge.
In order to be part of the trials, Andy had to be clear of all medicines for three months; he insisted that he was ‘fine’. Even though he was still working as a RTG driver at Felixstowe Docks at the time, Christina could tell that he wasn’t ‘fine’ at all.

The day before his birthday, Andy had a car-crash, writing off his car. In the accident, he broke some ribs and whilst being treated for that he found out that the cancer had spread into his bones. Characteristically, Andy pretended to be fine and began the trials anyway.

With the car insurance money, Christina and Andy decided to take the children to Lapland to celebrate her fortieth birthday, booking to leave on 19th and return on 21st December.

Unfortunately, Andy spent the night of 17th in hospital but was adamant that they would still go.
By 5am on the morning of their departure, they had called the doctor out three times with Andy experiencing great pain in his lower back due to uncontrollable hiccups throughout the night. 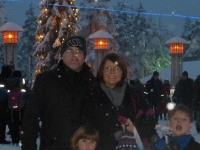 But fly to Lapland they did – and spent every night of their stay in hospital.

The children were unaware of this as Dad returned every morning as if nothing was wrong.

Whilst away, Christina admits that she ‘had to play nurse’ and that it was a real strain for her. The responsibility was too great and she decided to contact a friend, who worked at St Elizabeth Hospice, for advice and who got the Hospice at Home team to phone Christina in Lapland, who advised her on what to do, providing much relief.

Once at home again, Andy was absolutely exhausted, mentally, physically and emotionally from pain and they were both desperate for the help and support from the Inpatient Unit at the Hospice.

However, as there were no beds available, the Hospice at Home team visited and eased his pain until he was able to be admitted the next day, two days before Christmas.

“He cried in the foyer of the Hospice”, Christine recalls, “but then Dr Kitchener spent 45 minutes talking and reassuring him and that was a big weight off my shoulders. I know that Andy felt considerable relief too.”

Andy remained in the Inpatient Unit for three weeks whilst the nurses got his pain under control as the cancer had spread to his spine.

“They listened to him and worked out a pain-relief plan, with which he returned home, along with a walking-stick; a zimmer-frame and a wheelchair.

In those weeks back at home, Andy insisted on planning a new kitchen and bathroom as he, quite rightly said, that Christina would never do it otherwise.

Having had an emergency rush into hospital during this time at home, Andy requested to be transferred back into St Elizabeth Hospice where he felt safe. After three days, he made the transfer.

He tried to come home to be with his family and, with the support of the Hospice, the children’s playroom was turned into a downstairs bedroom.

It was now that he finally asked the question, “How long?” to which the answer was given:
“Long weeks: short months.”

He only lasted one night at home before asking to return to the Hospice, as a place of safety and he told Christina, “I have left home.” 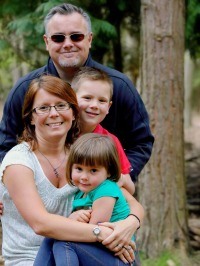 Andy spent a further six weeks in the Hospice: “The old Andy came back in those final two weeks” says Christina, “ he had gone to a very dark place for a short while which changed him; then he came out of it.

“He did get very tired but I always brought the children in every day and he knew people were coming into see him. He only really wanted close friends though.”

“They are all local people who remain in close contact with Christina and who, along with friends made at the school-gate, formed the band of supporters who now call themselves, ‘Andy’s Army’ and who organise a variety of fundraising events for Andy’s St Elizabeth Hospice Tribute Fund.

Andy died on 19th March 2014 from a blood clot to the lung which took its toll very quickly.

Christina had decided to stay the night as Dr Joe suggested that the time might be right. Andy’s last day began very normally with a bath and breakfast but it soon became apparent that he was not likely to make it through to that night.

“He fought to the end, wanting to get out of bed.”

Christina set up Andy’s Tribute Fund with the aim of raising £30,000 which, she calculated, was roughly the amount spent on Andy’s care whilst he was using Hospice services.

“Whilst it would be amazing to raise this amount for the Hospice, and maybe one day we will, it would be great to give as much as we can in tribute to Andy so that others may benefit from the wonderful care that the Hospice can provide.”

She admits though, that she won’t stop there as she intends for Andy’s Fund to be kept alive by their children as they grow up and take ownership of some of the annual fundraising activities she has set up, including: a memorial concert; a Ball: a quiz night on Andy’s birthday; children’s Christmas disco and a vintage tea party.

As part of her fundraising activities for Andy’s Fund, Christina participated in the Hospice Team 100 Cycle event London – Paris in September as well as The Midnight Walk on Saturday 16th May 2015.