“It was possible to just be a family” 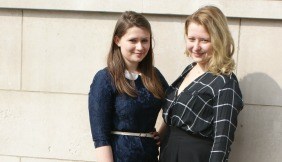 For Miriam and Catherine Paddon; some of their happiest memories are at St Elizabeth Hospice where their dad, Lee was cared for.

When he was 14 years old, Lee was diagnosed with neuroblastoma – cancer of the nervous system – a condition which normally presents itself between the ages of 18 months and five years, Lee was already an exception.

Neuroblastoma is a progressive illness and at 53, Lee was one of the oldest patients in Britain with the condition.

In his 20s, 30s and 40s Lee suffered relapses, then, from 2011, there was no remission. Instead Lee had regular treatment at University College London every six months in their Specialist Unit.

He was told at the age of 16 that he would never have children but, as Miriam put it: “Dad liked to put Medicine to shame and went on to have three of us.

“None of us believed he was going to die, he was such an active man who loved to ski; he was always going to the gym; playing squash; swimming – challenging us and invariably winning.” 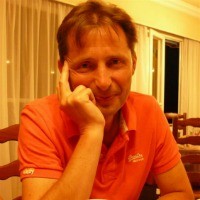 When Lee was admitted to St Elizabeth Hospice’s Inpatient Unit in October 2013, he turned it into a ‘home away from home’ and continued competing with his children. Both daughters remember them all watching ‘Pointless’ in his room and their dad winning, as usual.

Lee’s condition first appeared in his pancreas and throughout his life he underwent lots of surgery, none of which prevented him from living his life to the full.

Miriam said: “Dad’s whole life had been about quality.

“In 2005 a tumour on his lung was discovered but he lived with it. It never seemed to get in his way.”

Catherine added: “Holidays were not holidays; we described them as ‘Boot Camps’! Every year he would race us children in our grandparents’ pool – he always won. He hated for others to think of him as ‘ill’; he saw it as a life-long condition which had to be managed.”

“Some of my happiest memories were made at St Elizabeth Hospice”

Miriam said: “There was exactly the right level of checking in on you and giving you your own space.

“Dad was very private and would send us out of the room when the nurses came in to do something medical but we never felt intruded upon, everyone was quick and efficient – not sterile.

“They had lots of knowledge of how the patient felt.”

The family spent days in Lee’s room with him, “just chilling”.

Miriam continued: “It could have been such an awful time but actually, some of my happiest memories were made at St Elizabeth Hospice.

“It was an uplifting place, particularly the garden area and the patients’ kitchen.” 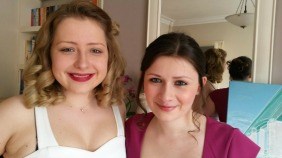 Both girls agree that being in St Elizabeth Hospice was all “surprisingly nice.”

“Everyone was so supportive; they couldn’t do enough for you.

“If you wanted to just be, you could. It was possible to just be a family.”

This feeling is exactly what staff and volunteers strive to create throughout the Hospice, from the day centre, through therapy consultations, gym visits and dining facilities to the Inpatient Unit.

Catherine and Miriam only found out that Lee’s condition had deteriorated to the extent it had, six weeks before he died.

Miriam came home from university on 31st October and was typically encouraged by her dad, to go out that night and celebrate Hallowe’en.

It was early the following morning that she was called to his bedside with the rest of the family.

Lee died that day, 1st November 2013 surrounded by those who loved him.

Catherine and Miriam took part in the 2015 Midnight Walk, in memory of Lee.

They intend to walk the eight mile route for St Elizabeth Hospice, their “home from home.”